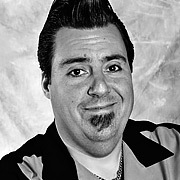 Joe Capobianco started his career as a tattoo artist in February of 1993. Since then he has tattooed around the world as a guest artist at numerous local shops and he has also been a featured artist at many international tattoo conventions. His tattoos and artwork have been seen in countless magazines and books, many featured articles have been written about his work and he has hosted several tattoo seminars on the subject of his tattooing techniques and philosophy. Joe has been a guest artist on the sixth season of TLC's hit show Miami Ink and has many more plans for his future in tattooing.