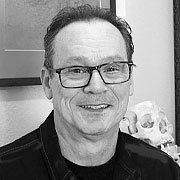 Rey Bustos graduated as an illustrator with honors from ArtCenter College of Design in 1989 and went on to illustrate for multiple companies and magazines. From 1990 onwards, Rey contributed to numerous fine art exhibitions and was represented by San Marino Gallery in Pasadena for several years, before he laid down his brushes to teach. Rey has been teaching since 1990 and is considered one of the preeminent artistic anatomy teachers in the country, known for his lively and passionate lectures. He currently teaches at ArtCenter College of Design as an associate professor as well as at the Los Angeles Academy of Figurative Art and Kline Academy. Rey has taught online for Computer Graphics Masters Academy (CGMA) and has recorded tutorials and a class in 3D Anatomy/Écorché for New Masters Academy. Additionally, he teaches Analytical Figure Drawing, Drawing and Composition, 3D Anatomy/Écorché, 2D Anatomy — and a class that he created: “Imaginatomy; An Anatomical Approach to Animal and Character Development.” His work is due to be published by Design Studio Press and an artistic anatomy book by Rey will be released in April, 2020.