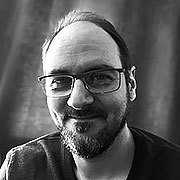 Sebastien Hue is a Concept Illustrator based in Paris, France. He started out as a self-taught artist in 2007 using Photoshop to design logos. Over the years, he began channeling his strong industrial background into his passion for digital art and a love for science fiction, helping him to find his true calling in the entertainment industry. He’s now called upon by clients around the world to create artworks that demonstrate scale, depth, and drama, which he brings together in intricately detailed designs.