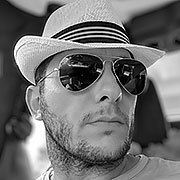 Timucin (Tim) Ozger was first introduced to 3D back in 1997 with 3D Studio R4. He started his career as a 3D generalist, before later specializing in VFX. Over the years, Tim has contributed over 20 high-profile projects working for top studios including MPC, Platige, Weta-Digital, and Worldwide FX. His credits include The Suicide Squad (2021), Godzilla vs. Kong, Artemis Fowl, Aquaman, The Mummy, and Ghost in the Shell. Tim currently works as the Head of FX at the award-winning studio Mr. X.