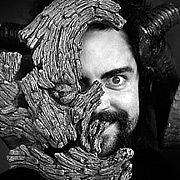 Johnny Fraser-Allen is a senior conceptual designer and sculptor with over a decade¹s experience in the film industry at the award winning Weta Workshop. He has designed characters and creatures for Peter Jackson¹s King Kong and The Hobbit Trilogy, Andrew Adamson's Narnia Chronicles and Stephen Spielberg's Tintin. With the help of Weta's facilities and its creators, Richard Taylor and Tania Rogers, Johnny has spent over eight years creating the immersive world of 'The Gloaming Trilogy'. With three novels worth of written story, the Gloaming has been illustrated with over 40 sculptures, over fifty illustrations and more than one hundred watercolor painting which are now touring the world in the Gloaming exhibition. Johnny is also working on another sculpture based book project titled 'The Wandering Woods', as well as a children's book titled 'The Preschool Pirates'. He also created all of the illustrations for 'The Squickerwonkers¹ written by actress Evangeline Lilly, published through Titan books.